Music in the Studio: Inspiration or Distraction?

When I rented studio space I used to long to play music at full blast in my studio (clearly I'm not one of the "silence is golden" crowd) but it wouldn't have been neighborly. In both of those studio spaces sound carried, so I was reluctant to disturb everyone around me.

Now that I have a studio all to myself, with the closest neighbor acres away, I don't hesitate to crank up the volume. My favorite CD at present is the soundtrack to the movie "Oblivion." The musical score is by M83 and I love, love, love it. It covers a whole range of expression, from achingly poignant to darkly dramatic. (Another reason Oblivion is near and dear: our niece, who works in production design, had a hand in making this film.) Other favorites are Sarah Brightman, Josh Groban, Secret Garden, Alan Jackson, Simon and Garfunkel and Celtic Woman. I think of all these artists as creative partners of sorts. They play an important role in my daily routine.

Rather than being a hindrance, music gets me into the "zone" very quickly and helps keep me focused. I'm not sure why, all I know is that when I work to music I get so much more accomplished than when I work in silence. Why this is so is a mystery. I'd love to know if anyone has done some research on this subject of working (or not) to music. How do you see it? Do you play music while you work, or do you need silence to get things done? Do you prefer a certain kind of music over others? Does it have an effect on your productivity? I invite you to click on "Comments" and share your thoughts.

Studio Clutter: De-Stash or Not?

They say nature abhors a vacuum. My studio is a good example of that, although the culprit is me, not Mother Nature. I'm a terrible packrat when it comes to art supplies. It's amazing how fast a space can fill up in just six short months when the impulse to stash goes unchecked. This was made apparent to me a few days ago when a friend asked me to send her some interior shots. Here's my studio as it appeared back in August, and how it looks now:


The studio seemed so big when it was empty!

The moral of this story is (1) Art supplies reproduce like rabbits, and (2) No matter how big your studio is, it will never be big enough.

I suppose the answer is to set aside time to rigorously cull out everything but the essentials. But when I've done that in the past, in other studio spaces, I've regretted get rid of something because inevitably I've found myself needing it later. Instead I devise ways to pack the most into the least space.

Today you'll find storage tubs filled with mixed media supplies under both work tables, the mat cutter sandwiched between the book cases and the wall, rolls of paper hiding behind the armchair and sheets of foamcore stacked in a sliver of space next to the refrigerator. It's amazing how much stuff can be stored in nooks and crannies. My studio may never again look as spare and clean as it did six months ago, but who cares? It's my haven and happy space. De-stash? No way. Sorting through it all would be drudgery. Finding oddball places to house it...that's creativity, baby!

Sometimes it's good to revisit a painting you've done even though it's now gone on to a new home. I try to photograph or scan every painting I do before it leaves my studio. This helps me in several ways: first, it's a visual record for my files and second, it comes in very handy for remembering what pieces looked like. After you've made countless paintings over the years, you find you can't possibly recall them all with any degree of accuracy. Photographing or scanning each piece solves that problem nicely.

It was especially helpful today. I had decided to lay aside my jewelry making - temporarily- to do some painting. Specifically, I wanted to paint an ethereal landscape in the same manner as this piece. I had painted Thorny Issues, below, with my fingers only. It has been a couple of years since I had used this method. Even though you'd think any 5 year old could handle that assignment, I was feeling kind of "rusty." Sometimes it's hard for us grownups to pretend we're kids! 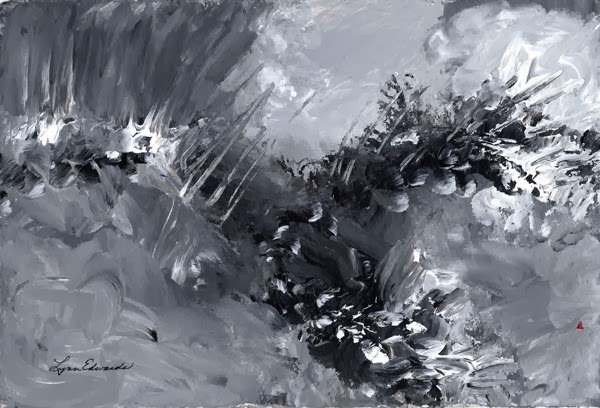 Anyway, today I hauled out a good sized wood panel (I think it was 24x36"), my heavy body acrylics,and started in. Unlike Thorny Issues, this piece will be much more colorful. I got a little carried away and soon had paint practically up to my elbows. I smeared and dabbed and pulled paint using my fingers and the palms of my hands. I confess I did use a brush at one point but mostly it was using just my fingers and hands. I had almost forgotten how good it feels to squish and smush paint....practically trance-inducing. I was still in an altered state of consciousness when reality intruded and I had to stop before I could finish it.

That's the problem with having so much fun. It always has to end. But I know my half-finished painting isn't going anywhere. It will be waiting for me when I head out to the studio tomorrow. I think Carly Simon recorded a song about this once. It was called "Anticipation!!!"

A Thought for Sunday

"If there is a soul, it is a mistake to believe that it is given to us fully created. It is created here, throughout a whole life. And living is nothing else but that long and painful bringing forth."  -- Albert Camus
Posted by Lynn at 11:58 AM No comments:

The Face in the Tree

Ok, so we've been cooped up again thanks to another epic ice and snow event. Maybe cabin fever is starting to set in. This afternoon I glanced out the window and happened to see a face staring back at me from the tree just outside. Call me crazy, but does this not look like the face of a Really Cool Dude??!!

If you've listened to the news this week you've probably heard all about Atlanta's epic traffic jam. Caused by a couple of inches of snow and ice, millions of workers fleeing their places of business simultaneously, and the fact that every school released their student bodies within the span of an hour or so, our roads became scenes of unprecedented chaos. Thousands of vehicles ended up trapped on Atlanta's interstates and surface streets, completely immobilized in a bumper-to-bumper, 24 hour long sub-freezing nightmare. The resulting gridlock was unlike anything anyone had ever seen before. "Snowjam 2014" will likely go down in history as one of the worst traffic snarls in the history of the U.S.

To mark this record setting event, I thought it might be an appropriate time to post a photo of a collage I did a few years ago. It's actually titled "Gridlock." Specifically it was the teeth-clenching nature of the metro area residents' daily commute that I wanted to convey with this piece. As anyone who lives here knows, at peak traffic times it often takes an hour or more to travel just 10 miles. And that's without any fender benders or other problems (like ice) to contend with. The aerial views of this week's traffic debacle reminded me so much of Gridlock I just couldn't resist sharing it with you.