Due to the Corona virus, the Surface Design workshop has been postponed until this summer. The new date for it will be announced when the Art House re-opens.
JOIN ME AT A WORKSHOP
SURFACE DESIGN WORKSHOP FOR ARTISTS & CRAFTERS
I'll be teaching this one-day workshop on March 14, 2020 at the Art House! Learn to design your own unique papers and other materials for collage, card making, scrap booking, journal making etc. I supply all the materials. All you need to bring is a sack lunch and a beverage. Hours are 10-4; fee is $90 per person. Register online at acworthartsalliance.org/purchase-workshops/classes or call 678-543-5777. Act now! Seating is limited! 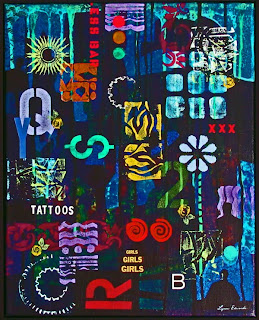 The past few weeks have been anything but favorable to painting. Despite a bad case of schedule crazies, I did manage to finish Hey, Baby, a 20x16 mixed media painting, just in time to get it into this month's rotation at the gallery, plus two small collages, Sojourn and Corinthian II. The little collages practically created themselves. Hey, Baby, on the other hand, was a breech birth.

For starters, the theme -- urban life's seamier side -- was uncharted territory for me. Actually I was a bit uncomfortable with it. But that was the direction this painting wanted to take, so who was I to argue? When you paint intuitively, as I tend to do, you accommodate rather than impose. It's kind of like driving a taxi: the passenger tells you where they want to go. Your job is to get them there. Usually this approach is a pleasure for me. Not this time! Most frustrating was one stubborn passage that I just couldn't seem to resolve no matter what I did to it.

About 10 days into the project, bingo! I finally saw what had eluded me up until that moment: the problem area appeared to suggest a female form. A pole dancer, to be exact. Once I recognized her presence and gave her a bit more definition, I was able to bring the painting to a satisfactory completion. She was the vital element that had been missing, the key image around which the others needed to revolve. She may not be immediately obvious (you have to look closely to see her) but there she is, shaking her booty for the shadowy figures who populate her world.

Sometimes what a painting needs is right there in front of us, but it just takes a while for us to see it. Had I given up on it (boy, was I tempted!) this painting would likely have ended up in the dumpster. Instead my pole dancer's now struttin' her stuff on the gallery wall. I don't know who is more surprised -- her or me!
Posted by Lynn at 9:00 PM