Due to the Corona virus, the Surface Design workshop has been postponed until this summer. The new date for it will be announced when the Art House re-opens.
JOIN ME AT A WORKSHOP
SURFACE DESIGN WORKSHOP FOR ARTISTS & CRAFTERS
I'll be teaching this one-day workshop on March 14, 2020 at the Art House! Learn to design your own unique papers and other materials for collage, card making, scrap booking, journal making etc. I supply all the materials. All you need to bring is a sack lunch and a beverage. Hours are 10-4; fee is $90 per person. Register online at acworthartsalliance.org/purchase-workshops/classes or call 678-543-5777. Act now! Seating is limited!

Creating a Welcoming Holiday Entry on the Cheap

It has been crazy busy around here the past few weeks. With company from out of state arriving at Christmas, Hubs and I are racing against the clock to get the house in order.

Naturally we want our home to be nicely decorated for our guests' arrival. And that includes spiffing up the front porch. I already had a pair of wreaths and a door swag on hand in shades of silver, turquoise, lime green and magenta. (These colors work well with the house's body color and the blue-green front door.) I also had a pair of small artificial trees to position on each side of the front door. Hubs had strung white fairy lights in the trees several years ago but we had never decorated them beyond that. This time I wanted to decorate them to coordinate with the swag and wreaths, but I wanted to do it on the cheap! 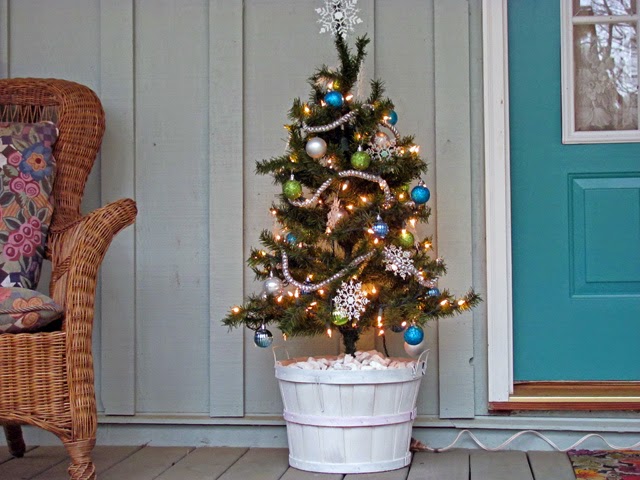 The biggest problem with these trees was that their ugly, square plastic bases were 12 inches in diameter. That made it hard to find pots large enough to hold them that didn't cost the earth. None of the clay pots we had on hand were the right size. We looked at planters at Home Depot, which had some square ones at $15 each that would have worked, but I wasn't excited about spending $30 for them. Alternatively, I considered getting matching cardboard boxes and spray painting or wrapping them in decorative paper, but rejected the idea because the cardboard wouldn't have held up well if it rained or snowed.

Then Hubs discovered two old fruit baskets down in the basement. Turned out they were just the right size. All they needed was a coat of paint to make them look good. I handed him a can of Wal-Mart's el cheapo white spray paint -- it only runs about $3 per can -- and he went to work on the baskets. Bingo! (By the way, this paint is now my go-to for anything wood or metal, interior and exterior, that I want to paint white. It has a nice matte finish and it works GREAT!!!)

The next task was finding a way to anchor the trees so they wouldn't blow over in the wind. Two sacks of white marble chips at $3 each from Home Depot solved that problem nicely. We nestled an old 4 inch bed riser beneath each tree to support it, then filled in around the riser and up to the basket rim with the snowy white chips. The effect is perfect --- very "wintery!" 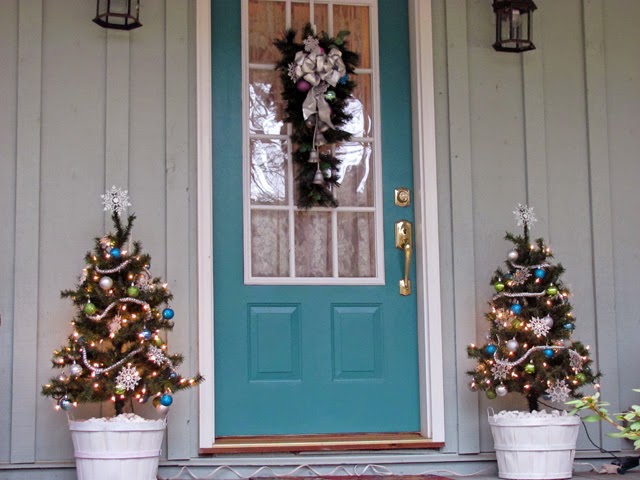 Next, a trip to Family Dollar and Big Lots yielded silver garlands, ornaments in silver, turquoise and lime green, and an assortment of lacy white snowflakes. All together they were $22. So including the marble chips, our total expenditure was a thrifty $11 per tree! Another plus: all the tree decorations are plastic, so they should last for years.

I think the baskets look so compatible with our farmhouse style home I've decided to leave them, minus the trees, in place year round. They'll make good supports for pots of ferns or flowers in the spring and summer, and I can display pumpkins and gourds on them in the fall. By tucking dried florist's moss in and around them to conceal the chips, the moss will give displays in those seasons a more earthy look. I can dress the baskets up even more by wrapping them with ribbon in seasonal colors, too.

Of course, the baskets will probably deteriorate over time, but even so, I figure that will take quite a while --several seasons at least. Meantime I'm so pleased with how this project turned out. We now have a welcoming holiday entry, and it cost hardly anything to create!