CURRENT SHOWS
The Art House Gallery, 4425 Cherokee St., Acworth Ga. . "Art from the Heart" exhibition. Jan. 11 - Feb. 29, 2020. Opening reception 4-7 p.m. on Sat. Jan. 11. The public is invited; admission is free. Gallery is closed on Sundays and Mondays. Call 678-543-5777 for more information.
JOIN ME AT A WORKSHOP
SURFACE DESIGN WORKSHOP FOR ARTISTS & CRAFTERS
I'll be teaching this one-day workshop on March 14, 2020 at the Art House! Learn to design your own unique papers and other materials for collage, card making, scrap booking, journal making etc. I supply all the materials. All you need to bring is a sack lunch and a beverage. Hours are 10-4; fee is $90 per person. Register online at acworthartsalliance.org/purchase-workshops/classes or call 678-543-5777. Act now! Seating is limited!

Earlier I wrote about my recent love affair with chalk paint. As promised, here's a look at the newly transformed console table. It took on a whole new personality when it was treated to a couple of coats of turquoise blue chalk finish paint by Decoart!


I bought this table for just $1.50 at a thrift store. In its original state it was pretty darned hideous. Its dark stained finish was dull, battered and gouged. One side panel featured two faux drawers with pulls, but the single real drawer that belonged between the fake ones was missing altogether, leaving a gaping hole. In such bad condition it rightfully belonged in a landfill. 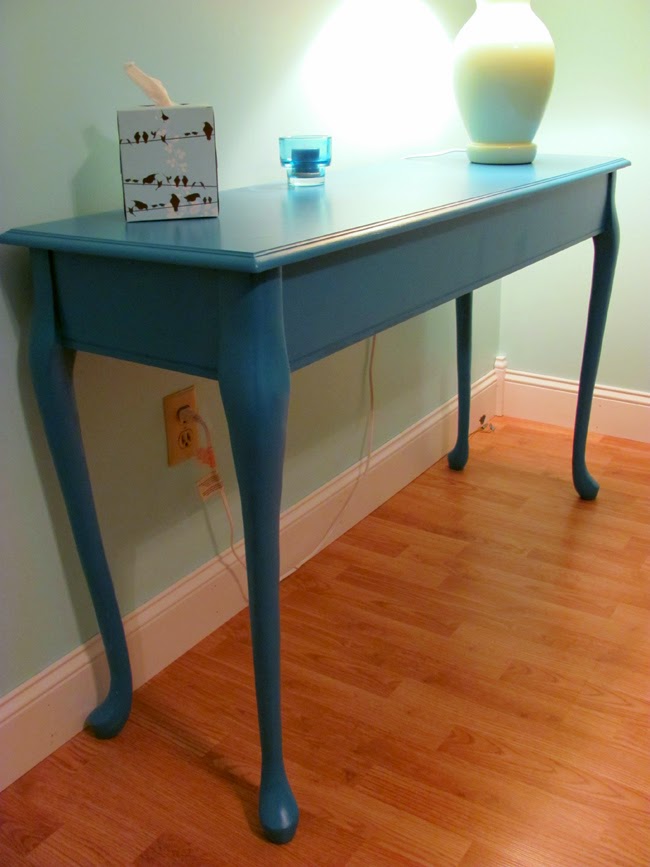 The thrift store manager seemed desperate to get this eyesore, tagged at $5.00, out of his inventory. He practically begged me to take it, offering to drop the price to $1.50 the moment I glanced in the table's direction. He stood there hopefully as I mulled this over. Despite its appearance, the table was reasonably solid. And all four legs were still intact. Hmmmm....So I pulled the $1.50 out of my purse and took possession of what was probably one of the ugliest pieces of furniture in North Georgia.

When I got it home, Hubs took one look, rolled his eyes in disbelief, and asked how much they had paid me to get it off their premises.

I should have taken a "before" picture and posted it but quite honestly I was embarrassed to, it was just that awful looking. And I was even more embarrassed to admit that after I brought it home, I placed it behind the sofa in the living room with every intention of starting the rehab right away. (Pigs would fly first. I should have known better.)

Meanwhile, I hid the worst of the blemishes on its surface with a big decorative birdcage and a pair of candlestick lamps. Positioned between the sofa and the wall, the table's faults were less noticeable. Whenever company was expected, I shrouded the whole thing under a table cloth and prayed our cats wouldn't stage a big reveal.

This, I am ashamed to say, went on for almost nine years.

Then last month, a dear friend contacted me to say she and her honey wanted to come visit us. That spurred the long-deferred renovation of a third bedroom-turned-junkroom. There wasn't time to shop for new furniture, so I decided to tackle the table makeover at the same time we painted the ceiling and walls and laid new flooring.

And so, with two coats of Decoart's chalk finish paint followed by two coats of satin varnish, the beat-up console table finally began its new life as a pretty and functional accent piece in our newly remodeled guestroom. There, it's on full display holding a lamp and other items. The side with the missing drawer faces the wall at present, but I'm hoping to persuade Hubs to replace it.

Like a pound rescue, the table has proven more than worthy of being given a second chance. Every time I look at it I'm really glad I bought it. It was a pretty good investment, I think.

Have you ever used chalk paint to rescue a thrift store find? How did it turn out? I'd LOVE to hear all about it!