CURRENT SHOWS
The Art House Gallery, 4425 Cherokee St., Acworth Ga. . "Art from the Heart" exhibition. Jan. 11 - Feb. 29, 2020. Opening reception 4-7 p.m. on Sat. Jan. 11. The public is invited; admission is free. Gallery is closed on Sundays and Mondays. Call 678-543-5777 for more information.
JOIN ME AT A WORKSHOP
SURFACE DESIGN WORKSHOP FOR ARTISTS & CRAFTERS
I'll be teaching this one-day workshop on March 14, 2020 at the Art House! Learn to design your own unique papers and other materials for collage, card making, scrap booking, journal making etc. I supply all the materials. All you need to bring is a sack lunch and a beverage. Hours are 10-4; fee is $90 per person. Register online at acworthartsalliance.org/purchase-workshops/classes or call 678-543-5777. Act now! Seating is limited!

The Collage That Started It All 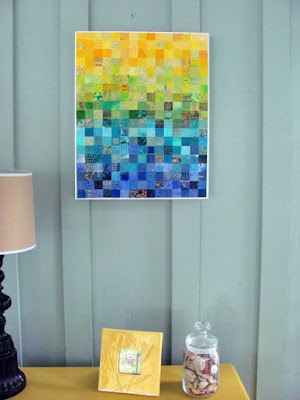 Ooops! I think I had promised to post a photo of the finished collage I was working on during my June 5 demo at 2Rules. Well, here it is...better late than never. It's comprised of 285 mostly handpainted paper squares that are slightly larger than one inch in size. I included some found papers as well, but the majority are my own. I also included several glass tiles ranging in color from clear to green to cobalt, placed in a random pattern. (They're hard to see in the photo. Ansel Adams I am not!)

The tiles refract the light and provide an exciting dimension to the surface of the work. To give it the maximum amount of UV protection, I used several applications of an isolation coat, followed by several layers of varnish. This was my very first venture into working with tiny squares of paper, and I'm delighted with the outcome. It now hangs on a wall in our new sunroom where it sparkles in the light and looks very much at home.